The 1984 calculator uses the ISO 7029 : 1984 formulae with the modifications stipulated at the foot of Tables 2 and 3 of CLB 2000 to produce comparative AAHL levels.

The calculator test results for the Male and the Female are provided below together with the values in Tables 2 and 3 of CLB 2000. 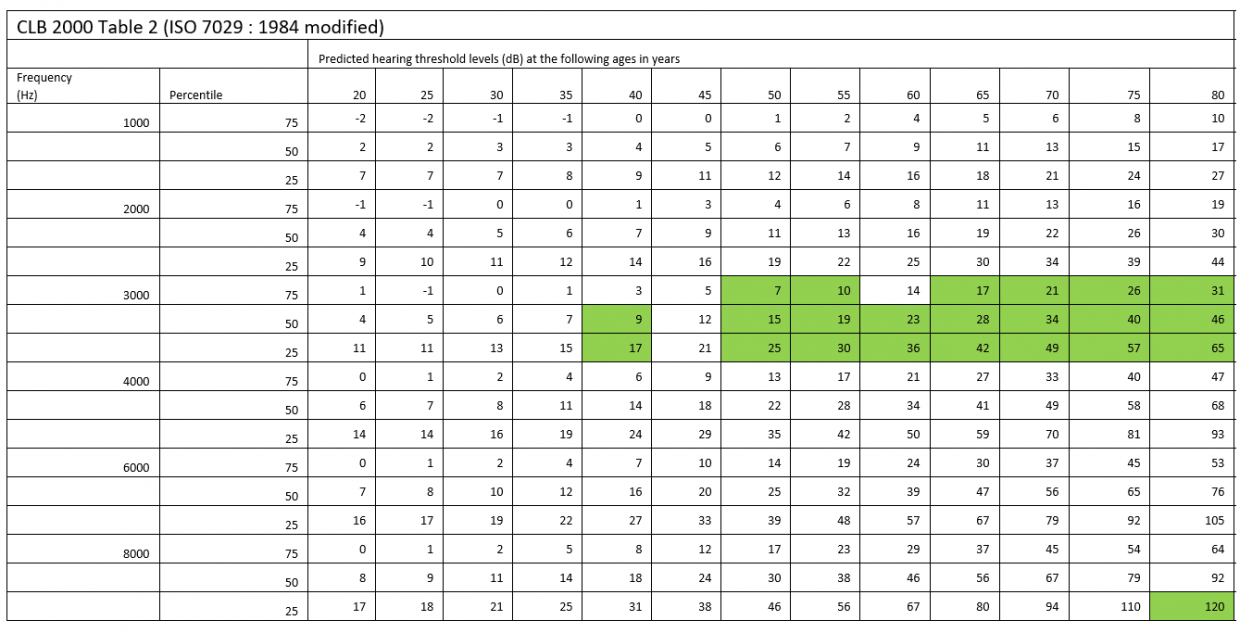 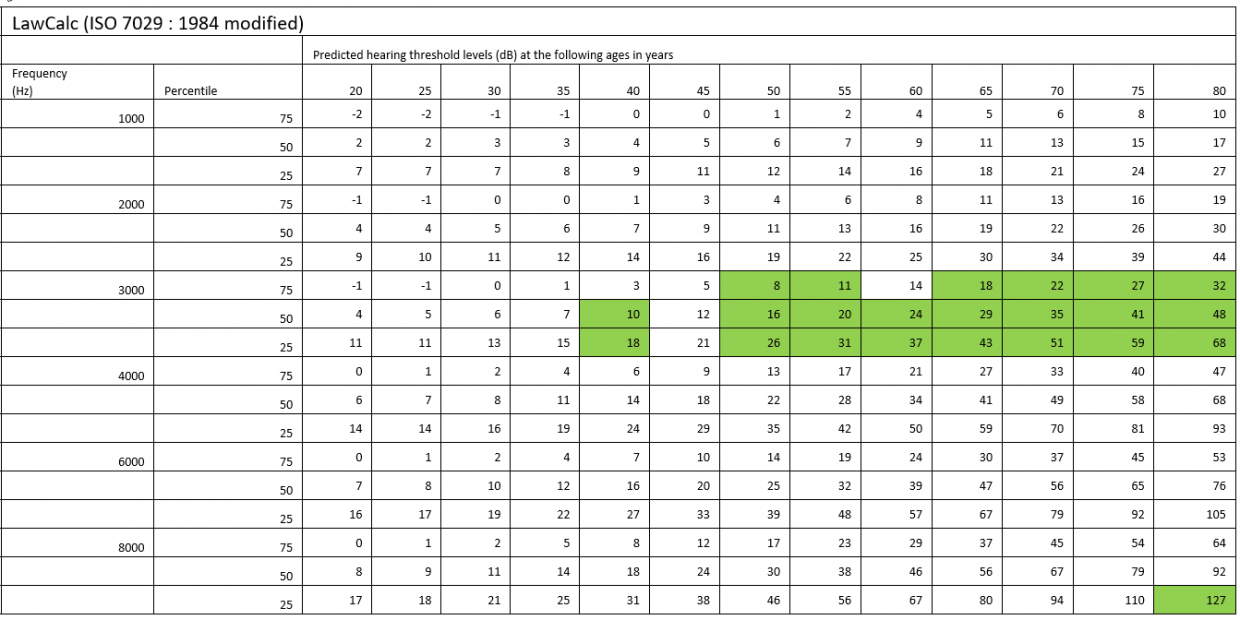 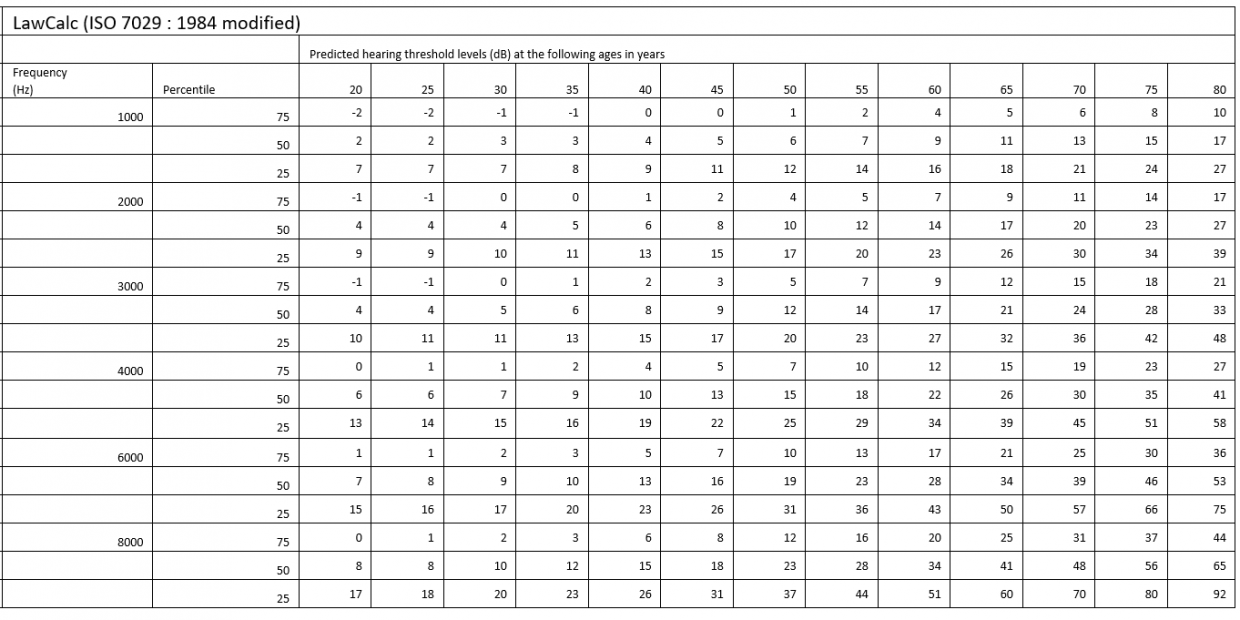 For Males at 3kHz, some calculator results differ from those provided in Table 2 CLB 2000.  All other results are consistent with Tables 2 and 3 with the exception of the 25th percentile at 8kHz for an 80 year old Male (*see below.)

Initial concern was that the calculator had an error within it at 3kHz in the male side only.  That possibility has been excluded; the formulae have been carefully checked and function as required by ISO 7029 : 1984 with the modification required by CLB 2000.

There are inconsistencies in CLB 2000.  One of those is the Worked Example at the end of CLB 2000.  It does not utilise the AAHL figures provided in Table 2 consistently.

The CLB authors clearly intended the annotation for the AAHL comparator values in the left ear to have read “25th percentile values” rather than the 75th as it appears in the Paper.  However, even accounting for this, the Table 2 values are not consistently utilised in the Worked Example in print. (7 out of 12 values are inconsistent.)

At 3kHz only the results may slightly differ from Table 2.  However, it was considered that retaining the exact method and the prescribed modification in Lawcalc maintained consistency of approach and calculation.

*The difference at the 25th percentile at 8kHz for an 80 year old Male is because Tables 2 and 3 truncate values in excess of 120dB to 120dB.

The 2017 calculator uses the ISO 7029 : 2017 formulae as stipulated by the standard without any modification.

The calculator test results for the Male and the Female are provided below together with the values in Annex D Table D.1 ISO 7029 : 2017. 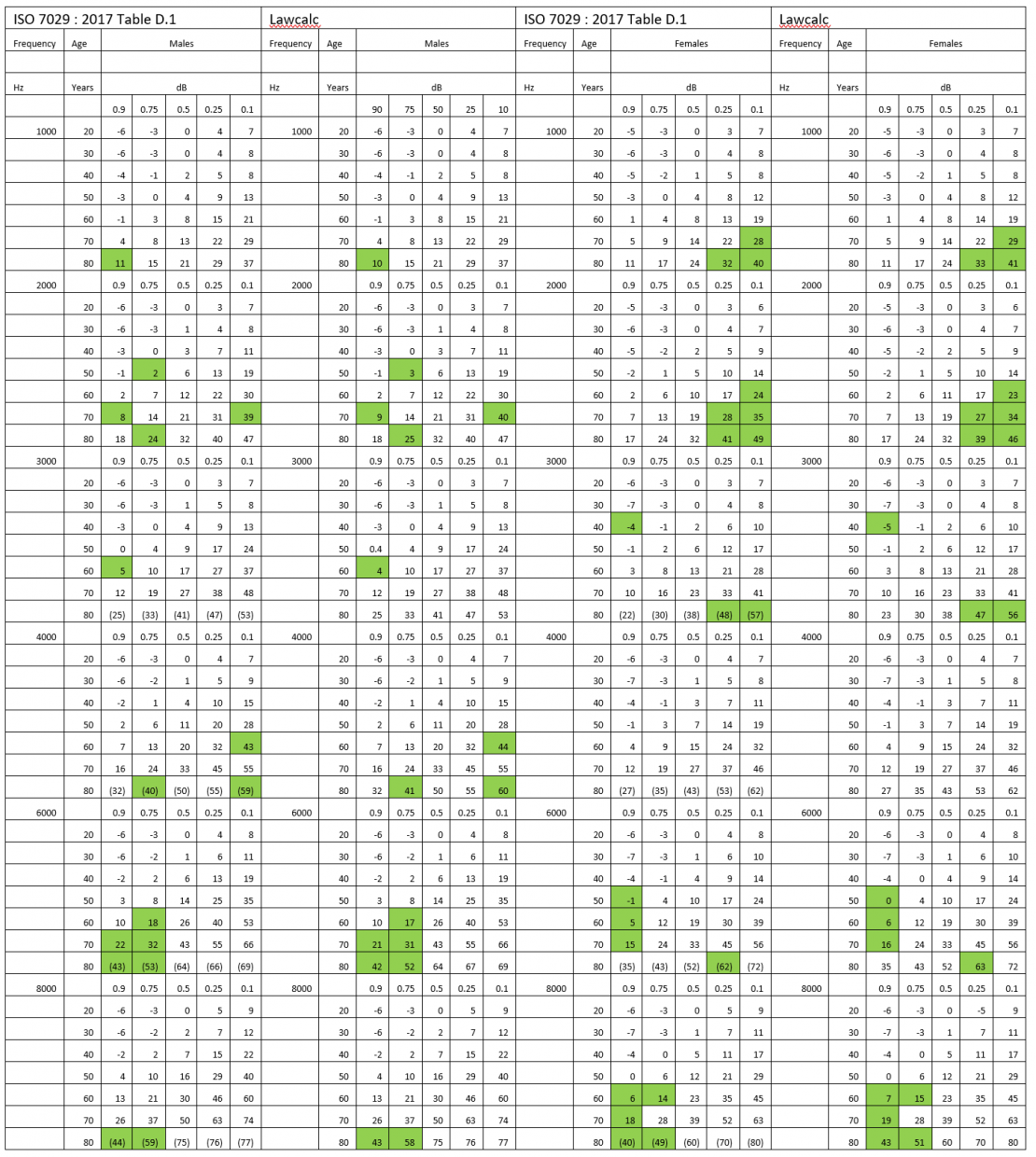 For Males and Females there are some differences between the calculator results and Table D.1 ISO 7029 : 2017.

The calculator formulae have been carefully checked and function as required by ISO 7029 : 2017.

It is known that others who have used the ISO 7029 : 2017 formulae have noted the same small differences between their results and Table D.1.

It was anticipated that there could be a difference of “1” between Table D1 and the calculator results at some points as it is not known how many decimal places were carried over into each calculation by the ISO technicians.

Audiogram analysis for 80 years + is understood to be less capable of a precise result in any event – and comparatively rare.  However, this information is brought to users attention when considering audiograms for those aged 80 +